May 24, 2019
My belief is that data scouting works. You can narrow a massive field to a very small field of potential players by identifying players with the attributes you want. You can identify these attributes by looking at how players perform these tasks which are reflected in their performance statistics.

But how many statistics do you need to look at to see if a player is actually any good?

Well, I have made an exciting discovery.

I reckon one statistic alone has been enough to identify pretty much the cream of Europe's defensive talent.

As regular readers will know I think Ligue 2 is the best value league around, for many reasons, so we will base this experiment on that.

What I want to do is use the data from previous years to look at young players who showed up well in a category and follow their career from that point.

The PL top 5 this year are:

Looks fairly accurate to me.

If I restrict it (as I will be doing for France) to players who are 22 or younger:

I don't think anybody would look at that list and think it was ridiculous. All these are young players, getting regular minutes who can pass the ball well from deep positions on the pitch.

The great thing now is that data has been around for a few years. My Wyscout data goes back to 2015/16 so what would happen if I looked at the good passing players from Ligue 2 in that season who were then <22. Would they have all disappeared into obscurity?

Lenglet of Barcelona, Gbamin and Niakhate of Mainz, Ait-Bennasser of Monaco. Cyprien of Nice. The most obscure is Cisse of Olympiakos but he is extremely highly rated and likely to move to a big 5 league club this summer. If we take (along with a pinch of salt) the value off Wyscout  (adding in 10m fo Cisse) then that is around £124m of players picked up by a single "meaningless stat"


OK, you say, what if that was a one-off? What happened in the next season? 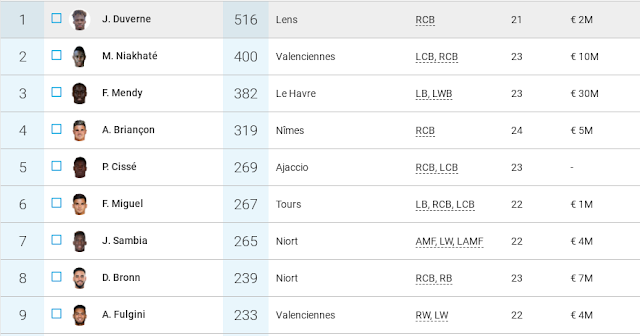 Top of the list is a player I'm constantly promoting Jean-Kevin Duverne AVAILABLE FOR FREE THIS SUMMER, he had a bad injury but is now back and looking good. Niakhate and Cisse are both in the list, showing the repeatability of the data. Then we have lots of new arrivals.
Ferland Mendy, of Lyon, heavily linked to Real Madrid. Briancon of Nimes who has anchored the midfield of the 7th placed team in Ligue 1. Florian Miguel too, who is now also at Nimes.
Junior Sambia defensive midfielder for 5th placed Montpellier. Fulgini of Angers now a French U21 international with 30 Ligue 1 games this season. Dylan Bronn? Player of the season for Gent and linked with Lyon.

Every single player over two seasons of data has gone on to success at a much higher level.

So it works for defenders? What about attackers. Let's go even lower and choose an even more basic statistic of "goals and assists".

The French 3rd division in 2015/16 sorted by goals and assists of players 23 and under:

JP Mateta, who has just scored 14 goals in the Bundesliga in his first season.
Nicholas Pepe, 22 goals with Lille and wanted by every major club.
Wissa who is now with Lorient near the top of Ligue 2.
Bouanga who is now at Nimes with 10 G+A this season in Ligue 1
Kamara of Fulham
Sada Thioub also of Nimes.

1. The sheer depth of talent in France
2. That Nimes and Mainz are two clubs who have gone heavily into this market and are reaping the benefits finishing much higher than clubs with much higher budgets.

Smart clubs should be working with smart scouting companies to find a way to find the best value players around.

Popular posts from this blog

Wyscout review and poking around the French third tier

I signed up for Wyscout on Friday and was given full access for 48 hours. Inbetween the busy bits of family life over a weekend in the run up to Christmas I thought I'd do a quick review of it and reveal some of the players I liked the look of. For those who have never used Wyscout it actually looks a lot like Football Manager (or at least Football Manager about 10 years ago) The home page allows you to select a league to scout. The package I was trialing allowed me full access to 5 leagues (I chose the big 5) and partial access to all the others. To be honest I really couldn't see that much difference between full/partial access for player scouting purposes. I decided to use the trial time to see if I could use their stats and video clips to find some promising players in obscure leagues. So I looked in the French 3rd division, my thoughts being that France is producing so much talent that their third level must have some potential top quality players in it - with a t
Read more

July 03, 2019
I've been looking more at progressive passes and what it might tell us about spotting players of high potential early on in their career. Original article here Progressive passes, as defined by Wyscout, are forward passes that are 30m long when the pass starts in the team's own half or at least 10m in length in the opponent's half. So far I've only looked at the volume of progressive passing. This has been because I cannot filter the data on the player ranking section of Wyscout other than by age. If I choose per 90 statistics a lot of players with a tiny number of minutes show up and push other players off the results screen (limited to 30). However, my suspicion has been that by using the volume of passes I am effectively looking at young players who played a lot. Young players who play a lot of games in lower divisions will get picked up by bigger teams. So maybe progressive passing isn't the great stat that I keep saying it is? How about I loo
Read more

December 17, 2018
After my weekend access to Wyscout I found a number of players from a quick data search, confirmed with a video view, who look to be worthy of further investigation. I looked for players I thought would be good for ambitious championship clubs, or those in the middle to lower half of the Premier league. The players I've found are from the second tier in France, Italy and Spain. One thing that is good and bad about data scouting is that the players identified are often the players who already have a good reputation. So in some cases I may be talking about players beyond the recruiting powers of the Championship, however I think 2 of the players from France and 1 from Italy are ready for Premier League clubs. In terms of how I used the data I just looked for single stats these players did well, like ball progression or through balls. If a name cropped up a few times I watched some video. Not the most scientific method but I only had a few hours. Wyscout does provide some rada
Read more